“I attended UA from 2009-2013. My time there was marked by extreme events, both personal and local, including the tornado on April 27th 2011. I’m only leading with disaster because I think it tightened the bond between students and faculty and community beyond what may be normal for an MFA program. Our ego boundaries kind of dropped and we became almost a larger body for a while. Our egos snapped back into place eventually, but the love (and dance parties) continued. I’m still actively rooting for everyone I was in T-town with. 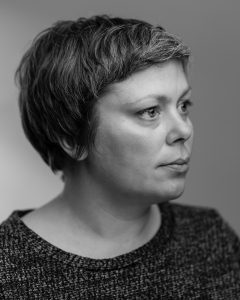 I’m in touch with many of my friends and professors still. Both have been incredible supports beyond the program. My professors still write letters for me and offer advice and send postcards(!). Some of the letters and advice really work! After a couple of years teaching at Rutgers and UA again, I was offered an Assistant Professorship teaching Creative Writing at Coastal Carolina University. My first year at Coastal my first book came out from FC2, It Had Been Planned and There Were Guides, and I got to tour around the country with it, which was a huge thrill. I also got married to the most amazing human and ran from several major hurricanes and floods. In the midst of that, I finished two more books which I’m submitting around now, and more are in the works.

Books have made me feel a little less lonely in the world. So that’s my professional ambition. To drop a stone or two into the river of this intimate tradition. In some nebulous way, a writer and a reader, or a bunch of people reading the same book or literary magazine become a larger body too. I’m really interested in the ways we merge as humans, with each other and with environments, and when and why we don’t. My time at ‘Bama was a four year master class in that. I’m forever grateful for it. I got to meet some current students on a recent visit just before the pandemic and they seemed to be on fire and writing their hearts out. I can’t wait to read their books and I’m wishing the new classes well as they navigate these times.”

Jessica Lee Richardson, a New Jersey native, lived in Brooklyn and performed Off-Broadway and elsewhere for years before earning her MFA in Fiction from the University of Alabama. Her short story collection, It Had Been Planned and There Were Guides, was published by FC2, won the Ronald Sukenick Innovative Fiction Prize and was longlisted for the PEN/Robert W. Bingham Award in 2016. Fictions have appeared or are forthcoming in the Adroit Journal, Hobart, Indiana Review, Joyland, the Masters Review, the Rupture, and Slice among other places. She is an Assistant Professor of Fiction at Coastal Carolina University where she coordinates the creative writing program and lives on the Intracoastal Waterway with a magician and a nine-year-old puppy.